Did you know Barbados has a dedicated island wide sea turtle conservation?

Barbados is currently home to the second largest Hawksbill turtle nesting population in the wider Caribbean, with up to 500 females nesting per year?

Turtle nesting occurs on most of the beaches around the island, many of which are heavily developed with tourism infrastructure.

Over the last century, sea turtle populations have significantly declined due to over-exploitation.

It is estimated that only 1 in every 1000 hatchlings will survive to adulthood which is not reached until 25 to 30 years old. It is only then that turtles can begin to reproduce.

Sadly, many newly hatched sea turtles get confused and are drawn away from the sea towards bright artificial lights into dangerous built up areas. Often they can be hit by cars, fall down drains and so never making it to the ocean. A large number of turtles are  also accidentally caught and drowned in fishing nets and long line fishing gear.

These endangered beautiful creatures are reliant on our help to protect the oceans and their habits. Environmental efforts and conservation such as the Barbados Sea Turtle project, a not for profit organisation has been involved in conservation  for more than 25 years. Volunteers patrol the island every night during nesting season to make sure as many hatchlings as possible find their way to the sea. 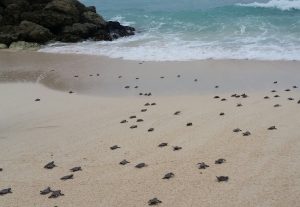 There are many ways to see these beautiful creatures in their natural habitat, Barbados has many diving and snorkelling options, from 30 mins trips to PADI certified courses.  You may also be lucky enough to witness a female turtle laying her eggs or the magic of babies hatching and making their way into the ocean.

Contact us to find out more and to book your turtle experience and many other things to do in Barbados.

Why Barbados leaves visitors more satisfied then any other destination in the world!